Best Businesses to Come Out of Northamptonshire | Fraser James Blinds

Our Favourite Businesses to Come Out of Northamptonshire

Thanks to Northamptonshire’s rich manufacturing heritage and fantastic combination of beautiful countryside and urban excitement, the county has produced some of the world’s most-loved products and successful businesses. That’s no overstatement either. Take a look at our favourite four below.

Best Businesses to Come Out of Northamptonshire

Thanks to Northamptonshire’s rich manufacturing heritage and fantastic combination of beautiful countryside and urban excitement, the county has produced some of the world’s most-loved products and successful businesses. That’s no overstatement either. Take a look at our favourite four below.

Dr Martens started life in Wollaston, Northampton in 1901, where the Griggs family were slowly making a reputation for sturdy, reliable work boots. They were at the very heart of the British shoemaking industry and, for six decades, the family worked tirelessly to perfect their craft.

The turning point came in 1960 when one of the Griggs brothers (3rd generation) saw an advert in a trade magazine for an air-cushioned sole, crafted by a German soldier who was recovering from a foot injury.

An exclusive license was acquired, some key changes made, and the iconic Dr Martens boot was born. Initially branded as ‘Airwair’, these boots were first worn by postmen and factory workers. However, seemingly out of nowhere, they quickly became a symbol of a number of different youth subcultures.

Today, Dr Martens are still being worn by people the world over. While style, music, youth culture and subcultures have changed dramatically, their iconic boots have remained in the vanguard of fashion.

Founded in Kettering as late as 1981, Pegasus Software was among the first software houses in the UK to launch its applications for the MS-DOS platform (Microsoft Disk Operating System). This certainly paid off as, since then, Pegasus has gone on to become one of the major suppliers of modular accounting, business and payroll software solutions to the SME market.

Today, there are around 25,000 Pegasus application licenses in use throughout the UK and Ireland, and the company now operates as a subsidiary of Infor Global Solutions.

Now over 250 years old, Weatherbys started life in 1770 when a Northumbrian attorney, James Weatherby, was appointed by the Jockey Club as their secretary in Newmarket, Northamptonshire. During his time with the club, James gained: ownership and publishing rights to the Racing Calendar, the club’s almanac; the role of “stakeholder”, providing accounting services to the sport; and responsibility for administration to the sport’s fledgling governing body. That’s pretty good going, if you ask us.

After James’ death in 1794, the business passed to his son, Edward, and so began the unbroken familial link between James Weatherby and the current seventh-generation owners of the firm.

Although the Jockey Club eventually handed its governing responsibilities over to the British Horse Racing Authority, Weatherbys has remained a constant racing administration presence. They also began new ventures, opening up a private bank for clients beyond the world of horse racing, and a publishing company responsible for one of the sport’s oldest journals.

You can’t talk about Northamptonshire businesses without mentioning at least two shoe companies, so here’s another: Loake.

Like Dr Marten, Loake began life at the heart of Northamptonshire’s shoemaking industry in 1880, where three brothers – John, William and Thomas, crafted shoes in an Outbuilding at Thomas’ house.

15 years later, Loake moved to Wood Street, Kettering where it can still be found today. It has a floor area of approximately 20,000 sq. ft, accommodates over 300 workers and is considered one of the finest and most advanced shoe factories in the country.

During World War II, the company produced a number of different styles of boot for the British army and, after the war ended, they increased production to carry stock lines. Their reputation steadily grew and grew over the course of decades, until 2011 when they opened their first shop, and in 2012, when they were awarded with the prestigious title of ‘Men’s Brand of the Year’ from both Drapers and the British Footwear Association.

Operating throughout the entirety of Northamptonshire, Fraser James Blinds are the go-to made-to-measure blinds suppliers in the region. We can offer you all the advice you need, and you can rest assured that our friendly fitters will measure and install your bespoke blinds with complete precision. For more information about the made-to-measure blinds that we offer throughout the region, get in touch with us today. 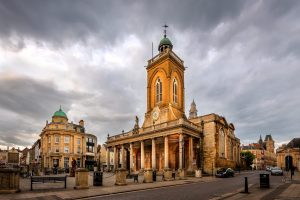 Buying and Styling a Property in Northamptonshire 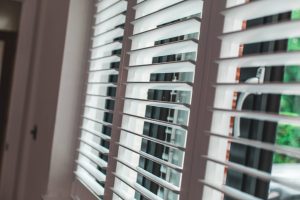 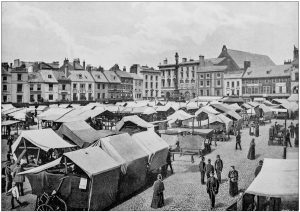 The Great Fire of Northampton

Read More
Latest insights
How does it work?
Call us or fill in a form and we’ll book you in for an appointment.
One of our friendly fitters will get the measurements and get you a free quote.
We’ll order your Blinds/Shutters or Awnings and provide you with a date to get them fitted.
We’ll get the Blinds/Shutters or Awnings fitted to perfection by our qualified staff.
Rated Excellent